Rant of a Senators fanSubtitle: Winning the argument with your crazy Orioles fans relatives

Given the issue with MASN impacting the sale of the Nats, Steve and I thought it might be  amusing to repost my article from July of 2016 with a few updates since history changed a few previous facts. There are just so many folks who don’t understand the history of the Senators/Nats/Orioles.

Steve made a number of updates/corrections to my original rant. And suggested a few other topics to include which we collaborated on.

I hope you enjoy reading or (for those of you who were TalkNats readers in 2016) re-reading this article.

Wishing everyone a very pleasant Thanksgiving Day. I wonder what Thanksgiving 2023 will be for these two teams – the 40 year anniversary of the last time the Orioles won the WS; the 4th anniversary for the Nationals winning the WS.

Let me start this off by saying:

This is truly a rant. So don’t expect great writing (like what Steve is producing). I am still angry about this and it shows. And I don’t apologize to anyone for showing my anger. I decided to write this based on this exchange with ScoreMore (click on the image to see the comments in context).

And this history is also why I am perhaps not as unhappy/critical as some fans are when things aren’t going well. I remember too many years of no baseball; and any baseball is frankly better than no baseball (October 1, 1971 – April 3, 2005).

Around Thanksgiving the talking political heads (no, I’m not going there) like to have little features about how to argue with your crazy uncle (or nephew/neice) about how wrong they are about something. So this post hopefully contains points you can make when your crazy Orioles’ fan relative or friend tells you that DC does not deserve a baseball team and how unfair it was when MLB moved to Expos to DC and they became the Nationals, or the Nats are wrong in the MASN dispute.

So in no particular order, lets address just some of these issues.

The Orioles had territorial rights to the DC and Metro area

That is simply not true. MLB has a rule that says a team can veto an expansion team or a team in the same league being set-up within 50 miles. Since the Orioles are in the American League and the Nationals are in the National League, this rule simply does  not apply. Territorial rights are league specific, and in the owner’s agreement that every owner signs it specifically spells out territories for stadium locations. The Nationals could not locate to Maryland but could move to Washington,  D.C.  In fact, when the Nats played a charitable exhibition game against the Red Sox at the US Naval Academy in Annapolis, Maryland in 2017, Angelos blocked the Nats from doing that again calling it a geographical territorial infringement, and MLB sided with the Orioles instead of working out a compromise.

The article also provides quotes about what Angelos and the Orioles think about the Nationals and their fans.

Before the Nationals moved from Montreal, Orioles owner Peter Angelos told a Baltimore radio station in 2004 that “there are no real baseball fans in D.C.” A decade later, Orioles manager Buck Showalter rankled Nationals fans when he said, “Our owner was kind enough to let them have a team here.”

The Naval Academy game was supposed to be an annual event since Nats Park is located in the Navy Yard, it was to raise funds for Naval charities. And you guessed it, the Orioles have yet to play an exhibition game there.  In 2019 they supposedly could not find an opponent to play the game. And in 2020 they did line up an exhibition game against the Mets – 2 days before Opening Day. We all remember what happened to MLB in 2020. Since then, nothing.  A Twitter DM from Steve as we discussed updating this article says it all: Angelos hated that the Nats did something cool.

Also, it is always fun to point out that the then owners of the Senators waived their territorial rights before the 1954 season so the AL St. Louis Browns could move to Baltimore and become the Orioles!

Gee, is there a pattern in Baltimore getting teams formerly called the Browns from other cities?

The Orioles owned the TV rights to the DC Metro area

Again, not true. Angelos has claimed that, but nowhere in any official MLB documents is there any support for that position. In the owner’s agreement the TV territories are defined and amended by the sole discretion of the MLB TV committee. Most teams overlap just as the Phillies and Orioles did and still do in Delaware, even prior to the Nats arriving in 2005.

Well, why then did Selig compensate Angelos and the Orioles via the MASN deal, you ask?

Simple – fear of an injunctive and protracted lawwuit from Angelos.  It would and did expose some of MLB’s dirty laundry in a public court proceeding. And we now know (and thanks to @PowerBoater for all of his great write-ups on this topic) how that has turned out. Trying to avoid a lawsuit, has led to  . . . . . a lawsuit.

And the reason Selig feared a lawsuit is that it would expose a lot of things about Loria (who owned the Expos and owned the Marlins) and how the deal was worked:

The story Miami Marlins ‘trade’ shows Jeffrey Loria, MLB at their worst by Tom Boswell (from 2012) has some interesting points to make on this topic.

This one is particularly galling.  Shirley Povich of the Post once said (and my apologies that I could not find the exact quote) so I will paraphrase from memory:

“Washington Fans support the Senators more than the quality of the team deserves.”

And for those of you who may not remember the great baseball writer Shirley Povich, an analogy. He was the Vin Scully of baseball writers.  He covered both World Series (1924 and 1933) the Senators were in. And one of the biggest crimes committed by MLB was denying him and his readers the pleasure of Shirley Povich writing about his home-team baseball team. Sadly he died in 1998 – well before baseball came back to DC. In 2012 George Solomon wrote After all these years, Washington finally has a playoff team to call its own about how Povich reacted to not having a team in DC, including his simple refusal to go to any Opening Day game once the Senators were stolen away to Texas.

So were the Senators moved to Minnesota because of lack of fan support? Almost Certainly Not.

If lack of fan support in DC was the issue, why did DC have an expansion team on Opening Day in 1961 – the same year the Angels came into existence? The AL expanded from 8 to 10 teams that year. And the NL added two teams (Houston and the Mets) in 1962.

The Wikipedia page for Calvin Griffith provides an answer – he was a racist and wanted his team to be located in a place that was predominantly white.

So instead of expanding into Southern California (the Angels) and Minnesota, it is reasonable to conclude that the MLB owners at the time decided to let Griffith move the Senators and replaced the Senators with a start from the beginning expansion team.

The 1971 Senators become the Texas Rangers

This is a much more nuanced issue. It is true that MLB was concerned about attendance. But the concern was about attendance in the DC/Baltimore area. They did not think the region could support two teams (both in the AL) that were so close to each other.

But here is the kicker – a big (and perhaps the biggest) part of the reason was lack of attendance in Baltimore. Attendance in DC was not great, and as Povich noted it was far better than what the team merited.

Let us look at 1968-1971 (the original tables can be found at the ballparksofbaseball site: http://ballparksofbaseball.com/attendance.htm). Please note that the source data was a bit difficult to deal with due to stadium names and moves. Hopefully this data is an accurate representation. 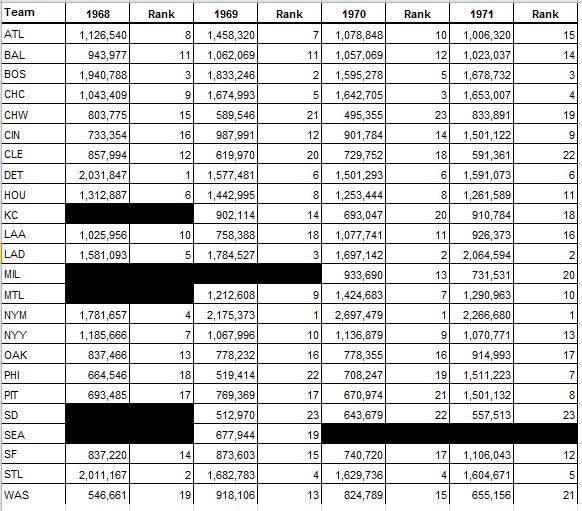 Now let’s provide some context for these numbers.

Attendance for the Senators was not great. But notice the jump in 1969 – there was excitement. Ted Williams (yes, that Ted Williams) became the manager of the Senators and for the first time in most everyone’s memory (except Shirley Povich), they had a winning record: 86-76. But that was just a one year mirage. They had a dramatic turn-around in 1969 – from 65 wins to 86 wins.

So tell me again how Washinton fans did not support baseball?

And if you factor in that Washington had among the highest ticket prices in all of baseball (documented in the above George Solomon article about Shirley Povich), the claim that DC did not support its team, is ludicrous. 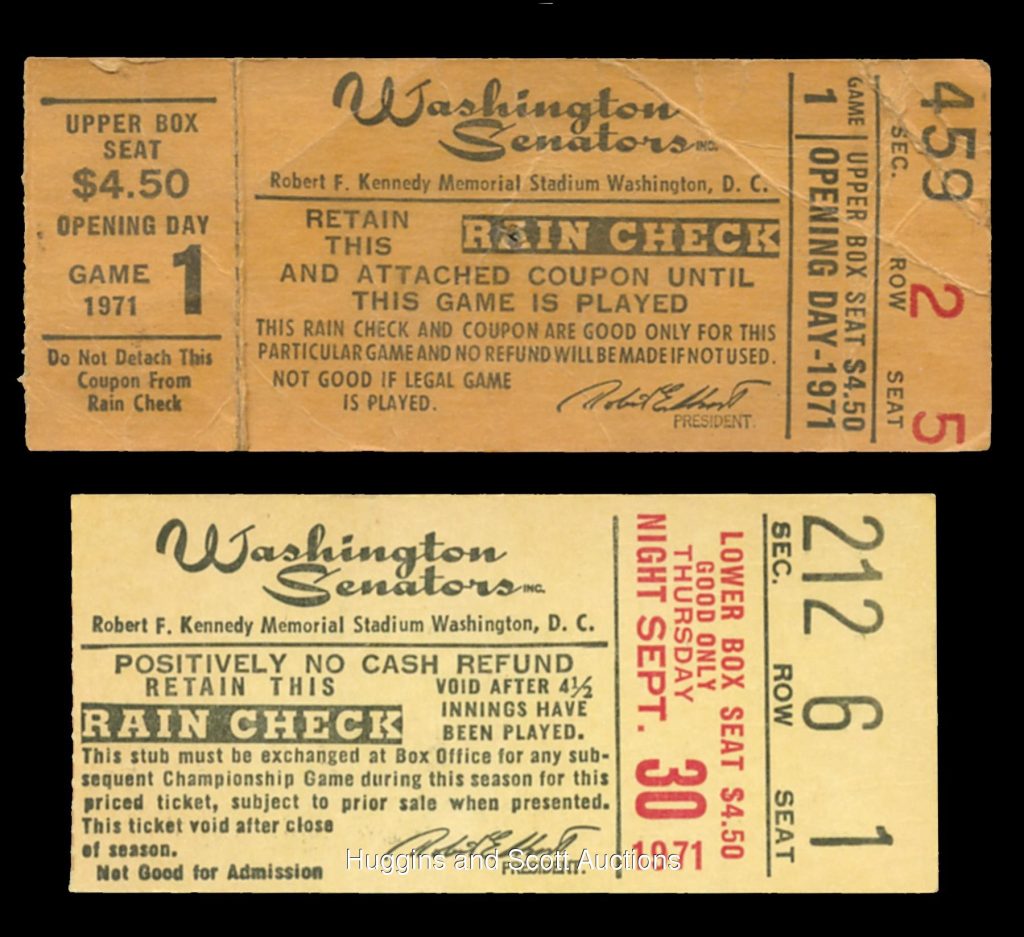 And if you want a few more factoids about the move to Texas, check out the Texas Rangers Wikipedia page which has some history on the Senators, for example:

No one here needs to be reminded that the Nationals had the worst record in MLB in 2022. The Orioles were in post-season contention until late in the year. You would think that would give them an advantage over the Nats in terms of attendance. But you would be very wrong. According to this ESPN link, the Orioles were 23rd in MLB, averaging 17,543; the woeful Nationals were 17th at 25,017 – more than 40% more. Yes, both teams probably benefited from fans of other teams. The Orioles have always had attendance bumps for Yankees and Red Sox games. It will be interesting to see what happens with the more balanced schedule – instead of 9/10 games against each of those teams they will have 6/7 such games.

Do you need more proof that Angelos was dead wrong about no baseball fans in DC? The Nationals outdrew the Orioles in each of the years they both made the playoffs: 2012, 2014 and 2016.

I graduated from high school in 1971 – the final year of the Washington Senators and had enjoyed being able to borrow my Dad’s car on occasion to go to a game (there was no Metro to RFK back then) for a few years.

But when MLB said [expletive deleted] to DC baseball fans and basically said your only option is the Orioles, I simply refused to support the Orioles. So until 2005, I basically spent my entire adult life without a baseball team to call my own.

So what is your story:

Melinda  is a research journalist working performing her duties as chief editor at this news station. She is a talented writer and comes up with facts everybody wants to know.

Melinda  is a research journalist working performing her duties as chief editor at this news station. She is a talented writer and comes up with facts everybody wants to know.